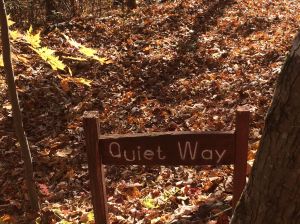 A few months ago, my dear friend Mary Louise invited me to attend the “Awakening Soul” conference held in the beautiful mountains of North Carolina near Asheville each year at Lutheridge Conference Center (http://www.awakeningsoulpresents.org).

The featured presenters are John Philip Newell and Barbara Brown Taylor.  Those who know me even fairly well know that Barbara Brown Taylor is one of my favorite preachers and writers, so I was happy to accept Mary Louise’s invitation to go with her (and the fact that I get to spend four days with my very favorite preacher and friend was a bonus).

I was not very familiar with John Philip Newell prior to this gathering and I am already smitten.  He has been a leader at the Iona Community and at Ghost Ranch in New Mexico, and is a poet, peacemaker, scholar, and is an ordained minister in the Church of Scotland.  His poetic language in speaking of a sacred thread that draws God’s people together really touched my weary spirit last night.

Today, he spoke of disillusionment in Western Christianity (the Christian “household”) and how Christianity may be reborn by rediscovering the sacred thread that connects all of the great wisdom religions.  I was particularly taken by his discussion of discovering Hinduism in India some thirty years ago, and his continuing reflection upon the presence of the Divine in all things, all creatures, and in all of creation.  It is deep and compelling stuff and I am looking forward to reading his book, Christ of the Celts: The Healing of Creation.

It’s a good year in which I am able to listen to Barbara Brown Taylor twice. At the Festival of Homiletics in May, I heard her lecture from material in her latest book, Learning to Walk in the Dark. This weekend, she is drawing upon new material for an upcoming book.  The working title, it seems, is Holy Envy.  Like Newell, she is drawing upon the the idea that “Truth is One, though people call it many names,” and “one light in many manifestations,” believing that there is wisdom in all of the great world religions that enrich and enlighten one another.  She does this, acknowledging that she is most interested in seeing how these traditions function and are re-interpreted in the U.S. where religious pluralism is quickly becoming the norm, not the exception.  While continuing to drink from the deep well that is her Christian faith, Taylor invites us to become open to living fully, respectfully and with great curiosity in an expanding Christian neighborhood. 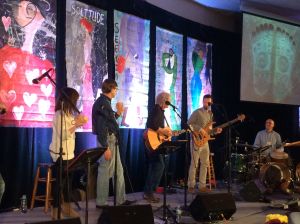 The music in itself would be reason enough to spend four days in the NC mountains.  Fran McKendree is leading a band with fiddle (Duncan Wickle), bass (Charles Milling), percussion (River Guerguerian) and beautiful vocals (Lindsay Blount).  Much of the group singing is in the form of chants composed by Fran, and I have a CD to bring home to my congregation.  They are simple, lovely and meaningful.  My favorite today:

this is the face of God.

The organizers have taken a large conference space and transformed it into a warm and inviting worship space, and the banner artwork created by a Tennessee folk artist, Rara Schlitt has much to do with the transformation. 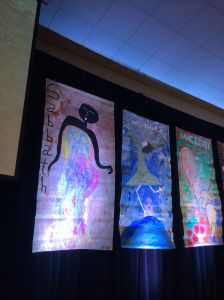 But perhaps my favorite part of this day was the hour we were given for a silent walk in the woods on this beautiful fall day. 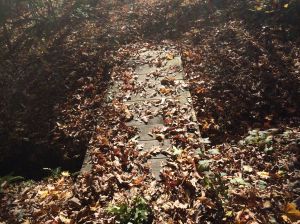 Preacher Nerd Alert:  I am not ashamed to admit that I was absolutely giddy when BBT sat next to me at lunch this afternoon.  I talked with her about Rachel’s studies at Harvard Divinity, and Taylor had me very nearly convinced that Rachel is really on to something with her interest in South Asian religions.  She agreed with me that Rachel’s generation, having grown up with friends of every faith, are much comfortable in exploring the threads that connect the traditions, yet point always to the One who created the earth and everything (and every one) in it.  Rachel understands, as Taylor said in her lecture, how various religions do not compete with one another, but complete one another.

Rachel is studying Sanskrit, so I hope she’ll be delighted to know that, thanks to Newell, I learned my first word in the language today — “maya.” Which means that all things are passing and have no ultimate reality.  Maya applies even to religion because it only exists for a time and only to point to the One, which is the only reality there is.

This introvert is talked out,  but am so grateful for this time spent in silence and conversation with new friends, as well as a very dear old one.  I am looking forward to hearing more from Taylor and Newell tomorrow.

Much to process.  And more to come…