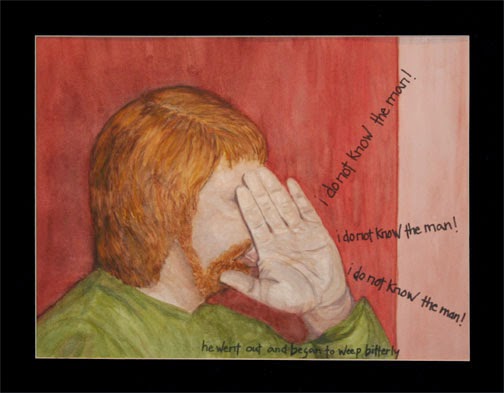 47While he was still speaking, Judas, one of the twelve, arrived; with him was a large crowd with swords and clubs, from the chief priests and the elders of the people. 48Now the betrayer had given them a sign, saying, “The one I will kiss is the man; arrest him.” 49At once he came up to Jesus and said, “Greetings, Rabbi!” and kissed him. 50Jesus said to him, “Friend, do what you are here to do.” Then they came and laid hands on Jesus and arrested him. 51Suddenly, one of those with Jesus put his hand on his sword, drew it, and struck the slave of the high priest, cutting off his ear. 52Then Jesus said to him, “Put your sword back into its place; for all who take the sword will perish by the sword. 53Do you think that I cannot appeal to my Father, and he will at once send me more than twelve legions of angels? 54But how then would the scriptures be fulfilled, which say it must happen in this way?” 55At that hour Jesus said to the crowds, “Have you come out with swords and clubs to arrest me as though I were a bandit? Day after day I sat in the temple teaching, and you did not arrest me. 56But all this has taken place, so that the scriptures of the prophets may be fulfilled.” Then all the disciples deserted him and fled.

57Those who had arrested Jesus took him to Caiaphas the high priest, in whose house the scribes and the elders had gathered. 58But Peter was following him at a distance, as far as the courtyard of the high priest; and going inside, he sat with the guards in order to see how this would end. 59Now the chief priests and the whole council were looking for false testimony against Jesus so that they might put him to death, 60but they found none, though many false witnesses came forward. At last two came forward 61and said, “This fellow said, ‘I am able to destroy the temple of God and to build it in three days.’” 62The high priest stood up and said, “Have you no answer? What is it that they testify against you?” 63But Jesus was silent. Then the high priest said to him, “I put you under oath before the living God, tell us if you are the Messiah, the Son of God.” 64Jesus said to him, “You have said so. But I tell you, From now on you will see the Son of Man seated at the right hand of Power and coming on the clouds of heaven.” 65Then the high priest tore his clothes and said, “He has blasphemed! Why do we still need witnesses? You have now heard his blasphemy. 66What is your verdict?” They answered, “He deserves death.” 67Then they spat in his face and struck him; and some slapped him, 68saying, “Prophesy to us, you Messiah! Who is it that struck you?”

69Now Peter was sitting outside in the courtyard. A servant-girl came to him and said, “You also were with Jesus the Galilean.” 70But he denied it before all of them, saying, “I do not know what you are talking about.” 71When he went out to the porch, another servant-girl saw him, and she said to the bystanders, “This man was with Jesus of Nazareth.” 72Again he denied it with an oath, “I do not know the man.” 73After a little while the bystanders came up and said to Peter, “Certainly you are also one of them, for your accent betrays you.” 74Then he began to curse, and he swore an oath, “I do not know the man!” At that moment the cock crowed. 75Then Peter remembered what Jesus had said: “Before the cock crows, you will deny me three times.” And he went out and wept bitterly.

I admit it.  This is the part of the story that breaks my heart, every single time I read it.  Because all of us have been where Peter is standing.  And all of us have done exactly what Peters does.  Deny that we know anything.  Pretend we have no clue what’s going on.  Betray a friend because we are fearful of standing in a vulnerable place.  I hate the feeling I get when I read this because, for me, this is the most human, embarrassing, convicting place in all of Holy Week.

What strengthens you to keep faith with those you care about?  What tempts you to abandon them?  Where have you felt abandoned?  Where do you need the support of good friends?  More to the point — who needs you?

Let us pray:  Lord God, protect and preserve us in this world that we might keep faith with the promises and responsibilities we have undertaken.  And when we feel alone and abandoned, remind us that you understand and are with us.  Amen.


If you are reading this via email or on a mobile device, you may have to click this link to watch the video: http://youtu.be/qwm6R1yhLyQ