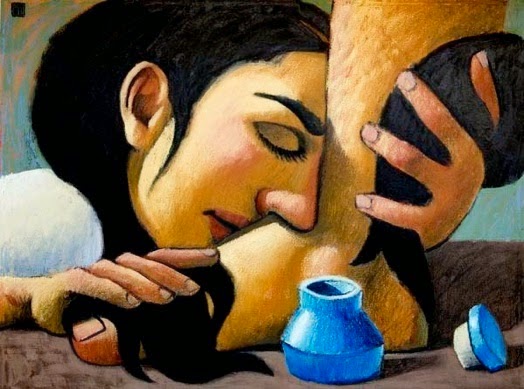 When Jesus had finished saying all these things, he said to his disciples, “You know that after two days the Passover is coming, and the Son of Man will be handed over to be crucified.” Then the chief priests and the elders of the people gathered in the palace of the high priest, who was called Caiaphas, and they conspired to arrest Jesus by stealth and kill him. But they said, “Not during the festival, or there may be a riot among the people.”
Now while Jesus was at Bethany in the house of Simon the leper, a woman came to him with an alabaster jar of very costly ointment, and she poured it on his head as he sat at the table. But when the disciples saw it, they were angry and said, “Why this waste? For this ointment could have been sold for a large sum, and the money given to the poor.” But Jesus, aware of this, said to them, “Why do you trouble the woman? She has performed a good service for me. For you always have the poor with you, but you will not always have me. By pouring this ointment on my body she has prepared me for burial. Truly I tell you, wherever this good news is proclaimed in the whole world, what she has done will be told in remembrance of her.”
Then one of the twelve, who was called Judas Iscariot, went to the chief priests and said, “What will you give me if I betray him to you?” They paid him thirty pieces of silver. And from that moment he began to look for an opportunity to betray him.

What would it take for you to betray a friend?  What small betrayals have we been part of, and how can we make amends for them?

Let us pray:  Lord God, prevent us from allowing our bitterness of disappointment to lead us to harm others, whether in thought or deed.

I was having a conversation with a group recently in which I confessed that my love for Scripture did not come about necessarily from my experience in the church while I was young, but through my love for music, particularly the musical “Jesus Christ Superstar,” which I heard for the first time when my mom purchased the original cast album in the early 70’s.


If you are reading this via email or mobile device, you may need to click this link to watch:https://www.youtube.com/watch?v=J30tQxAkvPY