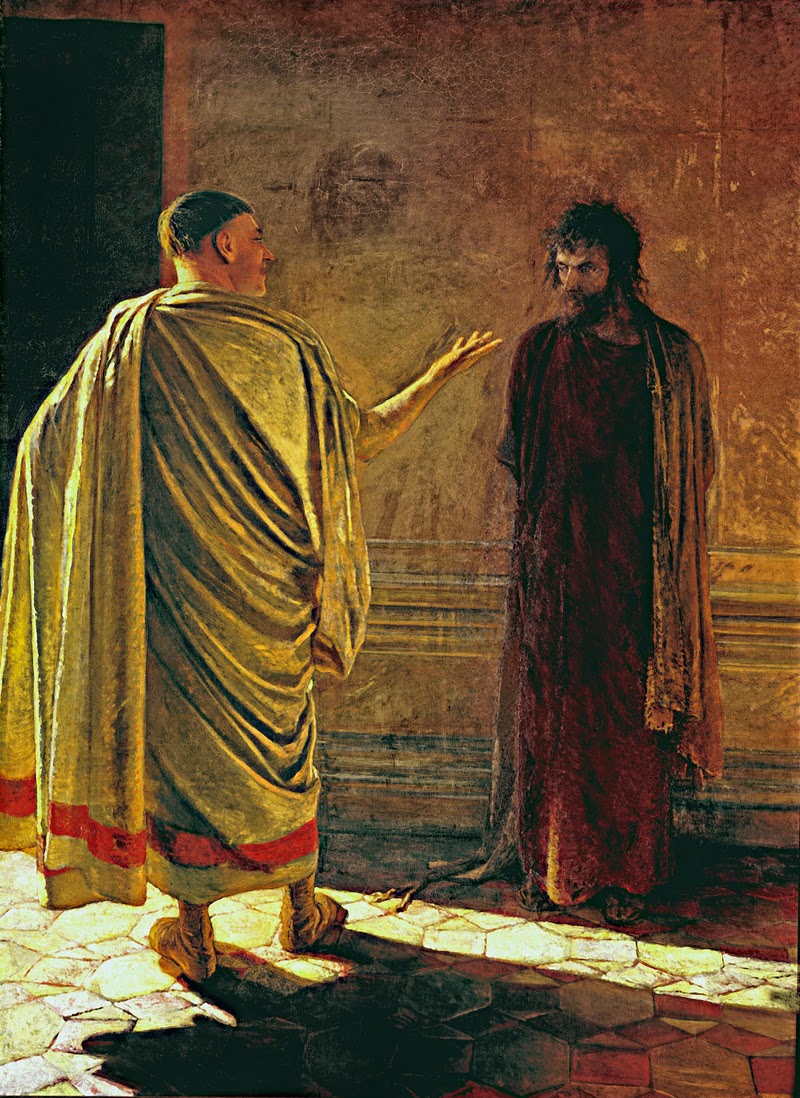 When morning came, all the chief priests and the elders of the people conferred together against Jesus in order to bring about his death. They bound him, led him away, and handed him over to Pilate the governor.

When Judas, his betrayer, saw that Jesus was condemned, he repented and brought back the thirty pieces of silver to the chief priests and the elders. He said, ‘I have sinned by betraying innocent blood.’ But they said, ‘What is that to us? See to it yourself.’ Throwing down the pieces of silver in the temple, he departed; and he went and hanged himself. But the chief priests, taking the pieces of silver, said, ‘It is not lawful to put them into the treasury, since they are blood money.’ After conferring together, they used them to buy the potter’s field as a place to bury foreigners. For this reason that field has been called the Field of Blood to this day. Then was fulfilled what had been spoken through the prophet Jeremiah, ‘And they took the thirty pieces of silver, the price of the one on whom a price had been set, on whom some of the people of Israel had set a price, and they gave them for the potter’s field, as the Lord commanded me.’
Now Jesus stood before the governor; and the governor asked him, ‘Are you the King of the Jews?’ Jesus said, ‘You say so.’ But when he was accused by the chief priests and elders, he did not answer. Then Pilate said to him, ‘Do you not hear how many accusations they make against you?’ But he gave him no answer, not even to a single charge, so that the governor was greatly amazed.
Now at the festival the governor was accustomed to release a prisoner for the crowd, anyone whom they wanted. At that time they had a notorious prisoner, called Jesus Barabbas. So after they had gathered, Pilate said to them, ‘Whom do you want me to release for you, Jesus Barabbas or Jesus who is called the Messiah?’ For he realized that it was out of jealousy that they had handed him over. While he was sitting on the judgement seat, his wife sent word to him, ‘Have nothing to do with that innocent man, for today I have suffered a great deal because of a dream about him.’ Now the chief priests and the elders persuaded the crowds to ask for Barabbas and to have Jesus killed. The governor again said to them, ‘Which of the two do you want me to release for you?’ And they said, ‘Barabbas.’ Pilate said to them, ‘Then what should I do with Jesus who is called the Messiah?’ All of them said, ‘Let him be crucified!’ Then he asked, ‘Why, what evil has he done?’ But they shouted all the more, ‘Let him be crucified!’
So when Pilate saw that he could do nothing, but rather that a riot was beginning, he took some water and washed his hands before the crowd, saying, ‘I am innocent of this man’s blood; see to it yourselves.’ Then the people as a whole answered, ‘His blood be on us and on our children!’ So he released Barabbas for them; and after flogging Jesus, he handed him over to be crucified.
Then the soldiers of the governor took Jesus into the governor’s headquarters, and they gathered the whole cohort around him. They stripped him and put a scarlet robe on him, and after twisting some thorns into a crown, they put it on his head. They put a reed in his right hand and knelt before him and mocked him, saying, ‘Hail, King of the Jews!’ They spat on him, and took the reed and struck him on the head. After mocking him, they stripped him of the robe and put his own clothes on him. Then they led him away to crucify him.

Where do you see the struggle for power and the easy resort to defamation and violence in our world today?  In what ways does fear poison our relationships?  What one thing would you ask God to change about your life or the world?  How can you contribute to making that happen?

Let us pray:  Use me, Lord God, as an instrument of peace in a world too often broken by violence and a thirst for power.  Amen.

If you are reading this via email or mobile device, you may have to click on this link to watch the video:http://youtu.be/l553Lxxqjvo