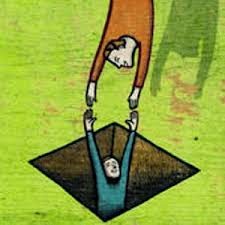 Lenten discipline of the day:

allow yourself to be vulnerable enough to ask for help.

Whenever I talk to someone who spends a lot of time volunteering or has just come back from a mission trip or some other endeavor where they’ve helped people in need, they always say the exact same thing.  “I get more out of it than the people I helped.”  Which is to say that helping other people gives most of us a very deep and good feeling.  Just watch a small child who is entrusted with their first small tasks around the house.  Children love to “help” their parents.  Human beings seem to have a deep-seated need to be needed.  We want to be useful and connected to other people!

Which is why I am always flummoxed by people who will not allow other people to help them. I am frustrated by those who will not admit that they need help.  Especially in the church.  Many of us have drunk the self-sufficiency cultural kool aid so deeply that we are wholly unwilling to allow any one to lend us a hand.  And if, God forbid, we have no option but to rely on someone else, we feel ashamed.  As if we’re not good enough or tough enough.  I used to think this was a predominantly male trait, but I’ve seen it often enough in women to know that it affects everyone.  None of us want to be vulnerable.  We don’t want to ask for anything from anyone.  We don’t want to take the risk of appearing weak or needy.

I invite you to practice allowing yourself to be a blessing to someone else by allowing them to bless you by giving you a part of themselves.  Ask a co-worker for advice on a problem.  Ask your child (no matter their age) for assistance or for a hug.  Instead of driving yourself somewhere, ask for a ride. Let someone open the door for you.  If someone asks, “Can I help?” say, “Yes.”

Over the past few years, I’ve become a great fan of Brene Brown, a researcher who writes about issues such an the importance of vulnerability and how it leads to more whole-hearted and healthy living.  I think vulnerability is a key issue for the church because it’s what we see so clearly in scripture — a God who commits to the world, gives humanity free will, offers laws and guidance, begs people to treat each other well, gets angry when they don’t, and continues to draw near to us to invite us into relationship with God restore our broken relationships with one another.  And God even took on the vulnerability of human flesh to draw near to us in the person Jesus Christ.

If you have never see the TED talks by Brene Brown, I invite you to take some time today (or whenever you can) to watch her first TED talk from 2010.  http://youtu.be/iCvmsMzlF7o