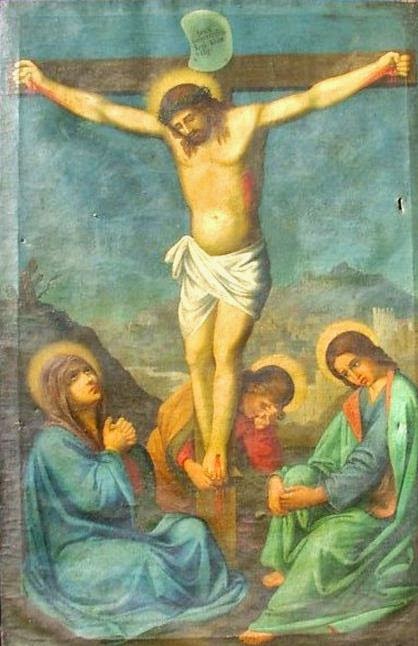 32As they went out, they came upon a man from Cyrene named Simon; they compelled this man to carry his cross.
33And when they came to a place called Golgotha (which means Place of a Skull), 34they offered him wine to drink, mixed with gall; but when he tasted it, he would not drink it. 35And when they had crucified him, they divided his clothes among themselves by casting lots; 36then they sat down there and kept watch over him. 37Over his head they put the charge against him, which read, “This is Jesus, the King of the Jews.” 38Then two bandits were crucified with him, one on his right and one on his left. 39Those who passed by derided him, shaking their heads 40and saying, “You who would destroy the temple and build it in three days, save yourself! If you are the Son of God, come down from the cross.” 41In the same way the chief priests also, along with the scribes and elders, were mocking him, saying, 42“He saved others; he cannot save himself. He is the King of Israel; let him come down from the cross now, and we will believe in him. 43He trusts in God; let God deliver him now, if he wants to; for he said, ‘I am God’s Son.’” 44The bandits who were crucified with him also taunted him in the same way. 45From noon on, darkness came over the whole land until three in the afternoon. 46And about three o’clock Jesus cried with a loud voice, “Eli, Eli, lema sabachthani?” that is, “My God, my God, why have you forsaken me?” 47When some of the bystanders heard it, they said, “This man is calling for Elijah.” 48At once one of them ran and got a sponge, filled it with sour wine, put it on a stick, and gave it to him to drink. 49But the others said, “Wait, let us see whether Elijah will come to save him.”
50Then Jesus cried again with a loud voice and breathed his last. 51At that moment the curtain of the temple was torn in two, from top to bottom. The earth shook, and the rocks were split. 52The tombs also were opened, and many bodies of the saints who had fallen asleep were raised. 53After his resurrection they came out of the tombs and entered the holy city and appeared to many. 54Now when the centurion and those with him, who were keeping watch over Jesus, saw the earthquake and what took place, they were terrified and said, “Truly this man was God’s Son!” 55Many women were also there, looking on from a distance; they had followed Jesus from Galilee and had provided for him. 56Among them were Mary Magdalene, and Mary the mother of James and Joseph, and the mother of the sons of Zebedee.


At the end, only the women would hang around to watch Jesus die. The male disciples are nowhere to be found.
I don’t know why the gospel writer so significantly chronicles the women’s continuing presence with Jesus all the way to his gruesome end.  Perhaps it is because at least two of the women watching were mothers and therefore are intimately involved with the beginning of life.  We intuitively understand that these creatures we carry in our bodies and birth from our bodies are mortal and will die someday.   And we give birth anyway.
I do not know why the women stayed.  It is so hard for me to look at Jesus on this day and keep my eyes open.  Even knowing how the story ends in a couple of days, I find that Good Friday retains it power to knock me flat.  I know how hard I try to avoid every kind of pain.  And there goes Jesus, embracing it.  It seems to me that he is never more “Emmanuel” or “with us” than on this day.
How does Jesus’ death tell the truth about our lives and world? How does it give us hope? Where do you see God still at work to redeem and preserve creation? Where do you long to see God?
Let us pray: Lord God, on the cross you suffered the very depths of our human life, even to the point of death. When we see the cross, let us remember that you become one of us and endured all elements of life to show us your great love and to give us hope. Amen.


If you are reading this via email or on a mobile device, you may need to click this link to watch the video: http://youtu.be/xdrD4fXgIM8