The Two Voices of Christmas 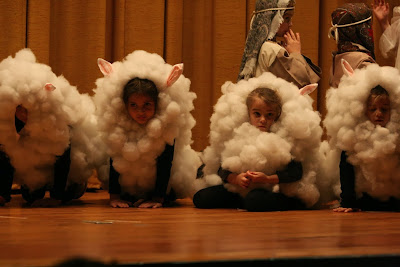 Let us pray:  O God, the word you most wanted to speak to the world, you spoke in Jesus Christ, your word made flesh.  Startle us again, in the midst of the familiar, loving customs of Christmas with the freshness of your love made flesh.  Open our hearts and minds to hear that good word again.  In Jesus Christ our Lord.  Amen.

In the early 13th century, people celebrated Christmas primarily by going to Mass, where priests would tell the Christmas story in a language that most ordinary people didn’t speak – Latin.  Christmas in that time involved elaborate artistic renderings of the Holy Family, and the birth of Jesus was most often expressed with jewels and gold and silk in the courts of the nobility.

After spending some time in the Holy Land, seeing the actual circumstances into which Jesus was born, St. Francis of Assisi was disturbed by the Christmas pomp that seemed disconnected from the reality of the biblical story.  So St. Francis set up the first nativity scene in a cave outside Greccio, Italy for midnight mass on Christmas Eve 1223.  St. Francis shocked everybody by staging the story of Jesus’ birth complete with live animals, poor people and a real baby.  During the Mass, Francis told the Christmas story from the Bible and then delivered a sermon about the first Christmas and urging the people to reject hatred and embrace love.  All of this he did in the language of the people gathered.

Francis’ idea caught on, obviously, and every year many churches do something similar with a Christmas pageant.  Some are very sophisticated with professional costumes and choruses and full orchestras and live animals.  Most, however, are pretty simple and very human in the spirit of St. Francis, and frequently they involved children.  At my former church, the high point of the Advent season was the children’s Christmas pageant, always held on the 3rd Sunday in Advent during worship.  The production was funny, chaotic but genuinely moving for me both as a parent, as well as a person of faith.  We spend a lot of time and words and money trying to figure out exactly what Christmas is all about, Charlie Brown.  But it only took a couple of squirrely toddlers in lamb costumes to remind me that the heart of Christmas means that God went all in and decided to cast God’s lot with a whole lot of lost sheep.  Which of course is all of humanity.  Thank God for that.

There are two voices present on this sacred night when we gather to hear the story again.  There is the soaring, lilting voice we hear in the Gospel of John, “In the beginning was the Word and the Word was with God, and the Word was God.”  You know that voice, that high, pure, transcendent, holy divine voice saying, “The light shines in the darkness and the darkness has not overcome it.”  That’s the first voice of Christmas. The divine voice of Incarnation that sparkles like a Christmas light and rumbles like thunder. The voice that reminds us that all our preparation for Christmas is, in fact, very serious business.

But there is a second voice speaking to us this night.  And that voice is a human voice that we sometimes have to strain to hear, because it can be very faint and hard to hear above the din of the first voice.

The second voice of Christmas is that human voice, the earthy reality of God with us, Emmanuel.  Of course, Jesus cried.  He cried for us.  He died for us.  And he still cries and laughs and exists with us.

In a famous Christmas sermon, Martin Luther asked his congregation to meditate on the nativity, not in the abstract but by looking at human babies.  He said, “I would not have you contemplate the deity of Christ, but rather his flesh.  Look upon the baby Jesus.  Divinity may terrify us.  Irrepressible majesty will crush us.  That is why Christ took on our humanity.”  The theologian Paul Tillich said, “One of Luther’s most profound insights is that God made himself small for us in Christ…God showed us his heart so that our hearts could be won.”

Why does this night matter so much to us?  It’s because this is the night in which we are reminded again that God knows us.  God knows what it is to be one of us, in these bodies we inhabit, in these families we create, in the sorrow and joy and boredom and surprise of just being a fleshy creature in this world.

What difference does it make?  All the difference in the world actually.  If the Word became flesh, then flesh, our humanity, has been blessed and sanctified by God.  All of it.If divine Word became human flesh, the world – the material, beautiful, natural world is not an evil place to be escaped as religion sometimes concludes, but a holy place, a good place, to be lived in and enjoyed.

If the Word became flesh, our own bodies are not to be escaped and denied, but lived in and loved and affirmed and enjoyed.

If Word became flesh, then we who believe this and trust it and stake our lives upon it have worldly work to do.  If God loves the world so much to come to it as a child and live in it, we must take the world seriously and live in it intentionally, and work to make all human life more kind, more safe, more just, starting with children – all children.

If Word became flesh and light shone in darkness and darkness has not overcome it, then even the darkness that is part of human life is different now.  We are never alone.  The drug dealer from Homewood lying in a hospital bed with a bullet in his leg wondering if he’ll ever walk again.  The 95 year old in the nursing home who has lost her friends and most of her family, facing the end of her days.  A single mom who hopes that the food in her refrigerator will be enough to keep her children fed until the end of the month.  The parents who don’t recognize the smiling, joyful child who has come home for Christmas as a sullen young adult.  The young Marine in Afghanistan sitting in the barracks and wondering if his girlfriend has found someone else to share Christmas with.  You.  Me.  Facing whatever we are facing.  If Word became flesh, we are never alone.


Of course he cried.  He cried and he laughed and he loved his parents and his friends.  He ate good food and drank wine and celebrated holy days and weddings.  He danced at parties and felt his body ache at the end of a long day of walking.  He stubbed his toe and his skin got goosebumps when he was cold in the middle of the night.  He endured acne as a teenage and learned how to build stuff with his dad.  He knew what it is like to love deeply and passionately.  He understood what it means to make yourself vulnerable because you love so strongly.  Vulnerable enough to come into the world as the most fragile of creatures, and vulnerable enough to die as a fragile human creature.


Of course, he cried.

We need two voices tonight.  We need the voices of the saints who will join us at this table, singing, “Holy, holy, holy Lord.  God of power and might.  Heaven and earth are full of your glory.”  We need the transcendence of angels singing, “Joy to the world!!”  We need the light-drenched prose of the Gospel of John announcing the incarnation of God.

But God knows we need another voice to reach out to us on this silent night.  The crying of a baby, breaking into our lives to meet us where we are, in all our hunger and all our human neediness.  To be fed.  To be warm.  To know and to be fully known.

It is Christmas.  Thanks be to God.

(Portions of this sermon are adapted from John Buchanan’s “No Crying He Makes?”)