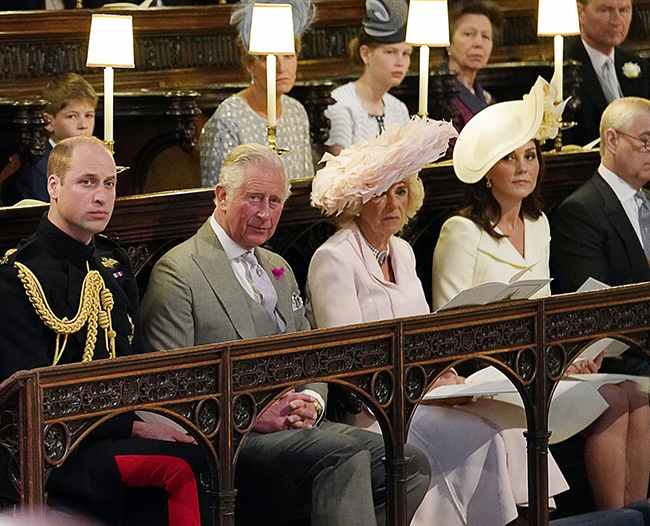 Today is the day of Pentecost, dear saints of Ingram, and I’m beyond delighted to be with you.  As I was thinking about which text I might preach on this festival day, I was both surprised and excited to see this text from Ezekiel in the lectionary as one of the alternate choices for Pentecost Sunday.

There’s something about this story of the dry bones that speaks deeply to me. Maybe it’s because I spend most of my professional, pastoral life working with congregations who are struggling and asking the very same question the Lord asks Ezekiel. Can these bones live? Do we have a chance to become vital again, to live again, to be the church we need to be for this time and into the future?

And no matter what the congregation, whether the church is growing or shrinking or holding steady, my answer is always the same as Ezekiel’s. Can these bones live? God only knows.

I am not a prophet, but even a prophet cannot predict the way in which the Holy Spirit will blow. And the church – every church — finds its life, its death, and its resurrection only and always in the power of the Holy Spirit.

It is the power of God and the presence of the resurrected Christ, still brooding over us and breathing new life into us and baptizing us with fire. A powerful Spirit that is anything but predictable. Always surprising. Seldom acting in our preferred human time, but always showing up only and always in God’s time.

The dry bones surrounding Ezekiel fairly shout out to us across centuries.  There’s nothing subtle about the vision, is there?  Ezekiel isn’t peering curiously at a few skeletons.  Ezekiel isn’t standing in an air-conditioned coroner’s office like in an episode of CSI where bodies are carefully kept in alphabetical drawers all clean and organized.  Ezekiel isn’t walking around a tidy cemetery with landscaped lawns and carefully crafted headstones.

No, the Spirit of God sets Ezekiel down in the middle of hot, arid valley, filled to the brim with the bleached bones of hundreds, perhaps thousands of people.  Death literally surrounds Ezekiel.  Bones as far as the eye can see.

And God says to Ezekiel, well, what do you think?  Can these bones live, Ezekiel?  And Ezekiel can only shake his head and say, exasperated, God only knows.

Some historical context here might be helpful.  Ezekiel dates to a period of Israel’s history known as the Babylonian exile.  To put it simply, Jerusalem and all of Judah were clobbered by the Babylonians in 6thcentury BC.

To understand the scene in Ezekiel, we first need to wrap our minds around the historical trauma of what happened to the people of Judah.

The Babylonians waged war on their country for almost two years.  The Judeans who didn’t get killed in the constant attacks endured unimaginable famine, disease and despair.  The book of Lamentations and the Psalms of lament describe the horror of it all, in sometimes very graphic detail.  The temple in Jerusalem, the center of the religious life, was reduced to ashes by the mighty Babylonian army.  The destruction of political, religious, commercial and domestic life was complete. Afterward, some of the population stayed in Judah, but most were forced into Babylon where they remained for more than 50 years.  Ezekiel himself was thought to be one of those exiles.

The prophets warned the people over and over again that they were in serious trouble and could not hold together much longer. They were drifting away from their relationship with the God who had delivered their ancestors from Egypt.  God kept sending prophets who challenged the religious and political establishment about practices that conflicted with laws of Moses and led to gross injustice.  The people had forgotten their obligations to the stranger, to the poor, to the outcasts. The streams of justice were drying up and righteousness no longer ruled in the land.

But the Judean people kept doing what they felt like doing, and they moved further and further away from the faith of Abraham, Moses, and David. The kings in Judah were terrible and ineffective. Their armies were even worse. Religious systems were corrupt. The chasm between rich and poor was becoming wider.  Society was crumbling.

Yet through all of this, the people Judah thought they were invincible and exceptional. They believed God would never allow Jerusalem to be destroyed because God lived there.

Well, by the time the Babylonians got through with Jerusalem, it must have seemed to the average citizen that God no longer was with them and had moved out for good.In fact, for many of the Judeans, the defeat by the Babylonians was definitive proof that their god – YHWH – had been defeated by a more powerful god from Babylon. God had lost in a stunning upset. When the going got rough, God did not come through as the people expected.

And who could blame the people for feeling betrayed and abandoned? Why wouldn’t they have imagined they could always depend upon God to protect them? Remember this was a nation that was always winning battles they were supposed to lose. They were always the underdog. If not for great fires, gusts of wind, oceans dividing themselves, and gold boxes, little Judah would never have won a battle.

But this time, there was no ark, no Red Sea, no manna dropping from the sky to see them through the Babylonian assault.  God had let them down. So many of the Judean exiles never returned to Jerusalem, and some even made pretty nice lives for themselves in Babylon. They gave up on YHWH altogether.

Ezekiel stands in the pile of dead bodies and preaches that God is going to put the flesh back on the bones of the shriveled, dry faith of God’s people in exile.  How ridiculous Ezekiel must have felt.  Preaching to bones. If I were Ezekiel, I might have suggested that the Lord first bring the bones back to life and THEN, I’d do some preaching.  Then I’d be able to say, “See?  See what God can do? Our story isn’t over!”

But Ezekiel preaches. Oh, does he preach.

Ezekiel stands on top on those dry bones and proclaims resurrection will come to God’s people.  But not in the way they had come to expect God to act in the days of Joshua, David and Solomon.  The people of God are promised, not a military victory, a restoration of status, nor retaliation against the Babylonians. They are not promised their old life.  Instead they are promised a new life.  God promises them two things: a future, and the continued presence of God’s spirit.

These prophetic words speak to our time as well. They speak to a world still not heeding the cries of the poor or the marginalized. Still ripped apart by hatred and violence. Still having the same arguments over and over.

These prophetic words speak to yet another group of families standing in a dry valley, holding the bones of their dead high school children who were shot this week in Texas.

These prophetic words speak to our church as we face the changes in our culture and rethink what it means to be Presbyterian now and into the future.

These prophetic words speak to our personal lives as we deal with all the joys and sorrows. As we pick through the dry bones of relationships lost and bodies dealing with the bruising of age.

Yes, this text tells us on this day of Pentecost.

There is hope because there is God and God is love.

And the Spirit of the Lord is among us and works through us.

The Holy Spirit, the breath of God, is at work here and now. Through Scripture and prayer, through music and proclamation, through experience and relationships, God’s holy breath challenges us, comforts us, scares us, clarifies things for us.

Pentecost tells us that if we dare to pray, “Come Holy Spirit,” we will find ourselves standing up like Ezekiel did and preach hope even in the valley of death and despair.

But do not be naïve, friends. The Spirit isn’t always gentle. In the Book of Acts, the Spirit arrives with fire and confusion and chaos. She will challenge us to act in cooperation with her. She will turn us inside out if that is what is required of us.

Barbara Brown Taylor tells about the time she spent three days on Barrier Island where loggerhead turtles were laying their eggs. She writes, “One night while the tide was out, I watched a huge female turtle heave herself up on the beach to dig her nest and empty her eggs into it. Afraid of disturbing her, I left before she had finished.

The next morning, I returned to see if I could find the spot where her eggs were hidden in the sand. What I found were her tracks leading in the wrong direction. Instead of heading back out to sea, she had wandered into the dunes, which were already as hot as asphalt in the morning sun.

I found her exhausted, all but baked, her head and flippers caked with dried sand. After pouring water on her and covering her with sea oats, I fetched a park ranger who returned with a jeep to rescue her.

He flipped her on her back, wrapped tire chains around her front legs, and hooked the chains to a trailer hitch on his jeep.

Then I watched, horrified, as he took off, yanking her body forward so that her mouth filled with sand and her neck bent so far back I thought it would break.

The ranger hauled her over the dunes and down onto the beach. At the ocean’s edge, he unhooked her and turned her right side up. She lay motionless in the surf as the water lapped at her body, washing the sand from her eyes and making her skin shine again. A wave broke over her, she lifted her head slightly, moving her back legs. Other waves brought her further back to life until one of them made her light enough to find a foothold and push off, back into the ocean.

Watching her swim slowly away and remembering her nightmare ride through the dunes, I reflected that it is sometimes hard to tell whether you are being killed or saved by the hands that turn your life upside down.”

We all wander into the dunes sometimes. We all find ourselves lying in the hot sun, our bones baking, wondering if we have anything left.

Sometimes are lives get flipped upside down and we’re getting dragged along into a situation we did not choose. But then the spirit of God moves, we get flipped right side up, and we slowly find our way again.

Love which created us,

Love which redeems us

Love which through grace

leads us into the future. 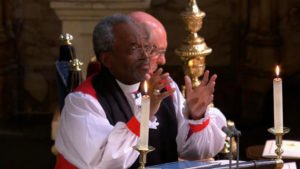 You might have heard something about a wedding that happened yesterday morning in England. I admit, I am a bit of an Anglophile, so I got up early to watch it. As I clutched my cup of coffee in the dawn’s early light, I heard these powerful words spoken by an African American bishop from the pulpit of a royal chapel to the dry bones of the Christian church in Europe.

Come Holy Spirit! Thanks be to God.